Links to More Sites of Interest 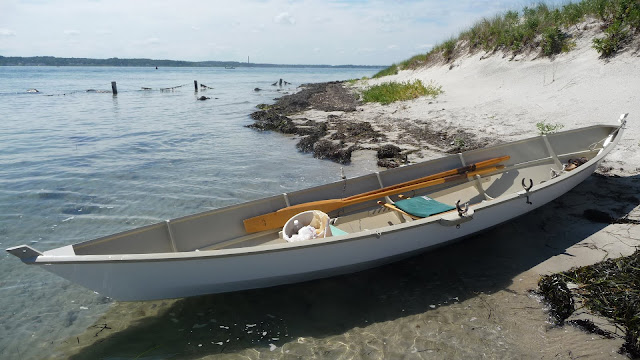 The Atlantic 17 design came about in response to a perceived need for an entry-level open-water rowing boat . At the time, there were many rowing craft to choose from of the fixed-seat, oar on gunwale, traditional type; but, in this designer's view, there was a lack of any boat that fit the "entry-level" criteria. Available boats were either too expensive, too difficult to row, too delicate, too heavy, too something for the beginning rower to invest in and make use of. At the same time, it seemed that it should be possible to produce a design that would be both forgiving enough for the novice rower and rewarding enough for the experienced rower; which would be simple enough to be built economically or from plans or kit by an amateur builder; and, which would be seaworthy, durable, yet light enough to be handled off a beach, float, or small dolly.

My first reference point in approaching this design was to review the 17 foot Herreshoff/Gardner  rowing boat Green Machine which is at Mystic Seaport in Mystic, Connecticut. This seemed entirely appropriate, as Francis Herreshoff had invited people to consider his original design as a starting point for developing a new breed of saltwater rowing craft, a baton picked up by John Gardner when he widened the design to allow for a wider oarlock placement. This latter change came at the suggestion of Allan Vaitses who for years rowed a boat of the original design, Herreshoff himself approved and praised the modification as a clear improvement.

However, the  Green Machine, while considerably simpler to build than a guideboat or Whitehall, is still a bit laborious to build for the purpose and criteria in mind herein, which is to draw new rowers into the healthful and purely sustainable activity of rowing on open bodies of water. It seemed important to lower any obstacles and smooth the way for people to try this activity, in a vessel that would be easy to use for the beginner while providing a long, useful life as the rower gained experience. This needed to be done in a craft both simple and economical to acquire.

From these two influences came the working proportions; 17 feet long, 48 inches beam (slightly more than Green Machine's), 15 inches depth amidships. I opted for a double-chine design, which adds initial stability and buoyancy compared to the single-chine of a Banks-style dory, while being considerably simpler than the Herreshoff/Gardner or traditional rowing boats. It was also important that construction be entirely of plywood, since this is economical and stable to work with.

As is my normal practice, I began with a half-model, from which I developed my working lines drawing. The original model was 18 inches wide at the midship section, which seemed like the correct number to work with. I decided, for simplicity's sake, to make this a symetrical double-ender. As the half-model developed, it became apparent that I was in fact designing a 17 foot, simplified version of a Gunning Dory, which meant the final boat would be exceptionally seaworthy, having ample reserve buoyancy in the ends. The basic design was completed in late 1999, and in early 2000 an order was received for what would be the first of four prototype versions leading up to the final Atlantic 17 design.

This first boat was built on moulds, with a tack-and-tape bottom chine and chine-batten at the second strake. I ended up adding a midship frame to stiffen the boat a bit. There was a seatbox with movable seats and footstretchers at the centerline of the boat. This boat was used for a number of years by her owner, who was an experienced rower and owner of many small boats.


The second Atlantic 17 was built as a pure prototype and display boat. It was also built to test the updated engineering behind the construction as it had evolved from the first boat. I decided to build the Atlantics on five plywood frames instead of on moulds, and to use chine battens at both of the chines. To test the concept, I used lower grade (AC Fir) plywood throughout, fiberglassed the hull using polyester resin, and did not epoxy-fillet the frames to the hull. The idea was to use the boat in a normal fashion, and see where any structural problems might emerge; those areas would then be modified and strengthened on the final production version.

One thing that emerged with this boat was that the bottom and garboard shapes needed to be changed. I had toyed with making the garboards a somewhat developed shape, but the result was a slightly pinched look amidships and a too-full look at the ends. So, on the third boat, the bottom was widened amidships to about 20 inches, and the ends were made a bit finer. This also gave the stem profiles a bit more curve at the bottom. A single, permanent thwart was installed.

Another lesson gained from boat # 2 was that the centerline seatbox was cumbersome, even hazardous, when boarding and de-boarding the boat. This was summarily removed, and some partial frames were added (sheetrock screwed) to the structural frames which would hold a pair of parallel seatrisers  . These allowed simple seats to be used in endlessly adjustable placements for weight adjustment.


Finally, and with the benefit of an order for three new boats (which are featured in photos on other postings at this blog address), all of the lessons learned were applied to what has become the Atlantic 17. New frames were designed that support and secure the seatrisers; seats and footstretchers were templated and made; and these three boats were built on 5/8 inch frames, planked with 5 mm plywood, sheathed in epoxy-fiberglass.Occuume plywood was used, making these boats even lighter than the 1/4 inch plywood versions (I would use the 1/4 inch plywood on the bottom if I went for lightweight again). The fiberglass cloth overlaps on the bottom, adding strength and abrasion resistance. The frames were filleted using West's filleting thickener; since then I have used the 406 thickener, which is much easier to work with.


I decided to go with the all-chine batten construction for a number of reasons. First, while it is a bit of work to fit and bevel these, when done they give the builder something to clamp and fasten planking to. They also provide a fair line to work to, which in turns makes it easy to achieve a nice, fair lines boat. And, because small planking pieces are used, these can be fitted, bonded, and fastened without a lot of rush or panic; one may even take a break or a week between planks, a luxury not available with other construction methods. A small skeg is bonded to the hull fiberglass; the 'glass weave is filled and faired with thickened epoxy.


After more than ten years of use and experience, the Atlantic 17 has proven to be the safe, seaworthy, durable boat for novice and experienced rower alike. People new to rowing have expressed a satisfaction with the "feel" of this design, which is often most of the battle in getting people involved in a new activity. Building the Atlantic 17 requires the same basic skills as a less versatile or comfortable banks-style dory, with a bit more work due to the extra strake of planking. All in all, it seems this design has hit the balancing points needed to qualify a boat design as a continuing success.

Posted by Jon Persson Designs at 11:26 AM

Jon Persson Designs
email at: jonpersson7@gmail.com For a direct link to my related blogs, please: